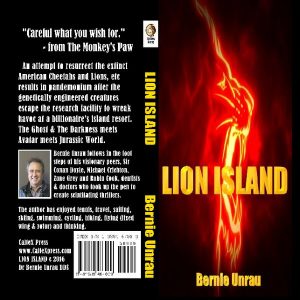 A bold vision by a determined billionaire to introduce an energy efficient resort and revive a unique form of Lion Country safari aka Ngala (meaning lion) Prehistoric Park in America’s own backyard reaches fruition. A plethora of extinct prehistoric species including the American Lion, (Panther Atrox), American Cheetah (Miracinonyx Inexpectatus), giant deer (Megaloceros) and many more critters that roamed the plains of North America tens of thousands of years ago goes awry. The genetically engineered creatures, resurrected from fragments of DNA including extinct Caspian Tiger, Saber Tooth (Smilodon fatalis) etc. to fill in the gaps escape from their enclosures at the CARE (Center for Animal Research and Education) facility, to go on a terrifying feeding frenzy of all indigenous species; American Bison, Camel, Giraffe, Saber Toothed Squirrels, etc  even the female form of the well heeled two legged Cougar Californicus which came to Lion Island (Santa Cruz), the largest of the Channel Islands, a biodiverse Galapagos of North America, only 3 hours from Ventura, California. Prey for the overwhelmed, outnumbered, outgunned but not outsmarted hunters in the ensuing chaos, intent on wiping the ferocious beasts off the face of the planet. The genetically engineered hybrid creatures are forced to flee the island as the original inhabitants, the Chumash Native American Indians were ages ago and find a new home. The Ghost and the Darkness meets Avatar meets Jurassic World.